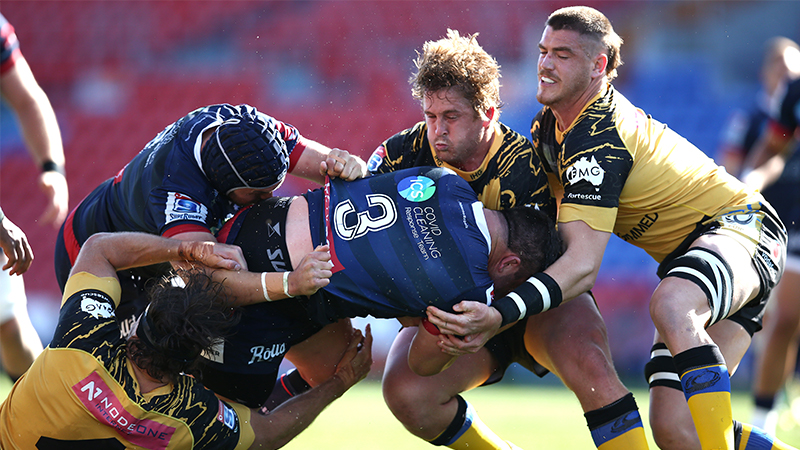 The Western Force have put on their best performance of the season, but were denied their first Super Rugby AU victory when the Rebels scored a try in the final minute to win 34-30 in a fiery clash at the McDonald Jones Stadium in Newcastle.

After trailing 20-13 at half-time, the Force fought back strongly to lead 30-27 in the 79th minute. Unfortunately, after a number of penalties and under immense pressure, they conceded a heart-breaking try that gave the Rebels the four-point margin they needed to qualify for the Vodafone Super Rugby AU finals.

The Force opened the scoring with a penalty by scrumhalf Ian Prior in the ninth minute after making a bright start and dominating possession in the early exchanges. They protected the ball well and recycled quickly at the breakdown, using short passes to the first runner to maintain forward momentum and put the Rebels defence under pressure.

The score stung the Rebels into action, and they launched several strong attacks into Force territory, eventually breaching a stout Force defence with a try by wing Tom Pincus after they had secured clean ball from a five metre scrum. Flyhalf Matt Toomua added the conversion to put the Rebels 7-3 ahead.

The Rebels’ lead was short-lived as the Force stormed into their 22 from the restart, launching a wave of attacks across the width of the field to create an opening for centre Henry Taefu to run in for the try from a pop pass from fullback Jack McGregor.

With the Force down 20-8, the men from the West responded with purpose finishing the half strong. After a series of forays into the Rebels 22, they won a line out five metres out and used their driving maul to good effect for hooker Andrew Ready to score their second try leaving the side with a seven-point deficit closing out the half.

Only four minutes into the second half, the Force levelled the scores at 20-all after Ready scored a second try in a virtual carbon copy of his first, rounding off after another strong rolling maul from a five metre lineout.

The Force took a 23-20 lead when Prior kicked his second penalty after a sustained period of pressure in the Rebels half. The Rebels were reduced to 14 men soon after with Pincus yellow-carded, allowing the Force to strike immediately through a try by flanker Brynard Stander after some controlled build-up play. Prior converted to give the Force a ten-point cushion at 30-20.

The Rebels hit back straight from the restart, creating a break by wing Marika Koroibete in midfield and moving the ball wide for fullback Dane Haylett-Petty to score. Toomua added his third conversion of the match to bring to Rebels to within three points.

With both teams looking for a decisive score in the final 15 minutes, play swept across the field with neither side managing to make the breakthrough. The Force received a second yellow card with six minutes remaining when flanker Fergus Lee-Warner infringed at the breakdown leaving the Force to complete the match with a man down.

The Rebels mounted a number of attacks in the Force 22 in the closing stages but were denied by some resolute defence. However, with a minute remaining they eventually breached the Force defence with replacement prop Cabous Eloff scoring the decisive try. Toomua converted to seal the 34-30 win for the Melbourne side.