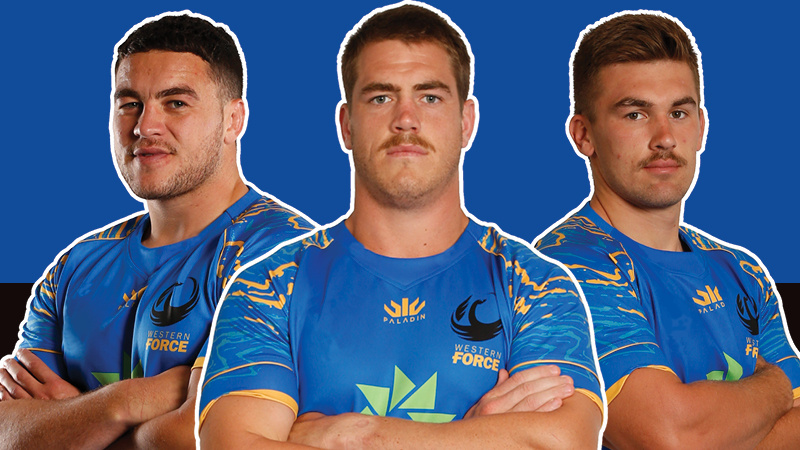 Forwards Fergus Lee-Warner, Kane Koteka, and Ollie Callan have committed to the Western Force for a further two years, with the trio signing new contract extensions.

All three played their part in our historic return to Super Rugby this year and the club is delighted to have secured their services.

Lee-Warner, who earned two Rugby.com.au Team of the Week selections, enjoyed an exceptional Super Rugby 2020 campaign after playing a key role in the Force’s NRC title run in 2019.

The lock, who also spent time as a blindside flanker, made 108 tackles (5th highest in the competition), 74 carries (2nd highest for the Force), and scored two tries in what proved to be a stellar season for the 26-year-old.

The powerful and hard-running New South Welshman has established himself as an integral member of the Force squad and says he’s will be looking forward to continuing his fantastic form for years to come.

“I can’t thank the club enough for showing faith in me, it feels unreal,” Lee-Warner said.

“We’ve got some great new players and we’ve retained a core group of long-serving players as well, so I’m keen to see how we gel and develop into a force to be reckoned with next year.

“I’m excited to see what the future holds with the squad we’re building.”

Proud Perth local Kane Koteka, who had Super Rugby experience previous to this year’s restructured competition after he debuted in 2015 against the Hurricanes in Perth, added four more Super Rugby caps to his name for the Force in 2020.

The 26-year-old Wests Scarborough product, who is a Future Force graduate, burst onto the scene winning the Matt Hodgson Rising Star Award following 10 appearances in his debut season in 2015.

After spending 2018 and 2019 in Japan with Top Challenge League side Kaimashi Seawaves, the openside flanker is thrilled to have returned home and continue his journey with his hometown team.

“I’m Perth born and raised, so I feel immensely proud to represent WA whenever I pull on the jersey,” Koteka explained.

“We’re building something special here, so it’s great to be here for another chapter in the club’s history.

“I can’t wait to be back playing in front of our incredible fans again.”

Callan, who took part in the Junior Wallabies training camp earlier this year, earned his first taste of Super Rugby this season making his debut in Round 2 against the NSW Waratahs at the Sydney Cricket Ground, and went on to make four appearances as a flanker for the Force.

The Perth-raised Wanneroo Rugby Club product is an exciting young prospect, with the 20-year-old poised to build on his bright start to professional rugby.

“As soon as the opportunity came up to re-sign with the club, I jumped at it,” Callan said.

“Being away for an extended period of time with the boys this year allowed us to build such a strong bond and develop that shared goal of improving as players and as people.

“It’s always been a childhood dream of mine to play for the Force no matter what the competition, so I’m really looking forward to what we’re building towards.”