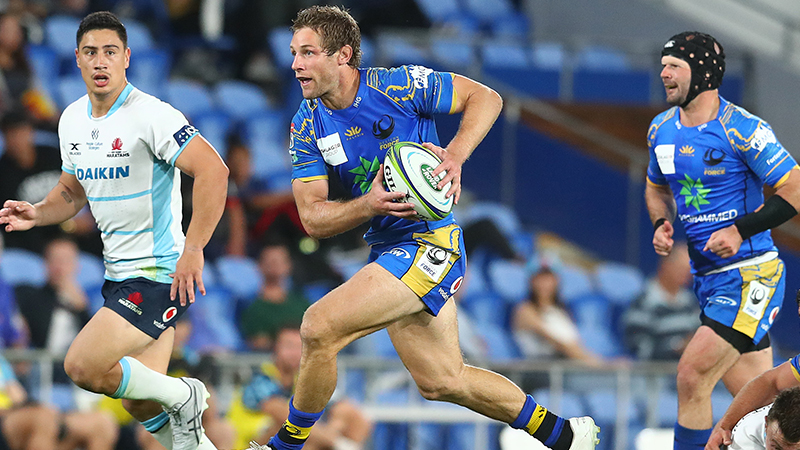 The Western Force is delighted to announce that Perth-raised centre Kyle Godwin has committed to the club for the 2021 and 2022 seasons.

Having returned to the club earlier this year for the Super Rugby AU competition, Godwin proved to be one of the standout performers and enjoyed a stellar campaign, earning back-to-back selections in the Rugby.com.au Team of the Week.

Godwin, who also spent time with the ACT Brumbies and Irish outfit Connacht in the international Pro14 league, is thrilled to be back where it all began.

“This club holds a special place in my heart and to be able to represent WA again means the world to me,” Godwin said.

“It’s great to re-sign with the Western Force. It feels like a homecoming after beginning my career here all those years ago.”

Making his Super Rugby debut for the Force as a 19-year-old against the Queensland Reds in 2012, the local talent swiftly emerged as one of Australia’s most exciting prospects with a string of impressive performances.

Godwin enjoyed a prolific time at the Force, collecting the Rising Star Medal and the coveted Nathan Sharpe Medal in 2013.

Having worked his way into becoming a key figure within the squad, Godwin was recognised on the international stage in 2016 when he became Wallaby No. 903, making his debut against France in Paris.

With 60 Western Force caps to his name, Godwin relished being back at the club this season and is looking forward to continuing his career in his hometown.

“I’ve really enjoyed the style of play that Tim Sampson has instilled into this group,” he explained. “I’m really looking forward to growing as a player under him; to be representing the Force again in Super Rugby this year was special.”

The 28-year-old, who was equal leader for the squad in clean breaks this season, is excited to be reunited with Western Australian rugby and for the bright future that awaits the club.

“My family is all located in Perth, so it’s going to be great to return to HBF Park and play in front of friends and family again.

“I’ve experienced the passion of the Sea of Blue and I’m really looking forward to soaking up that atmosphere and support once again.”

“It is great news to have Kyle commit to the club. Being WA raised and a returning player to our club is very important to us,” Sampson said.

“Kyle expressed his desire to return to the club and we were obviously delighted. He has many fond memories of growing up here in WA and has enormous respect for rugby in WA.

“Kyle showed his class recently in the Super Rugby AU competition and deserved every bit of his Wallaby squad call up.

“He loves pulling on the Western Force jersey and I am sure his commitment to the club is going to put a smile on a lot of people’s faces.”

More player announcements are expected in the coming weeks.