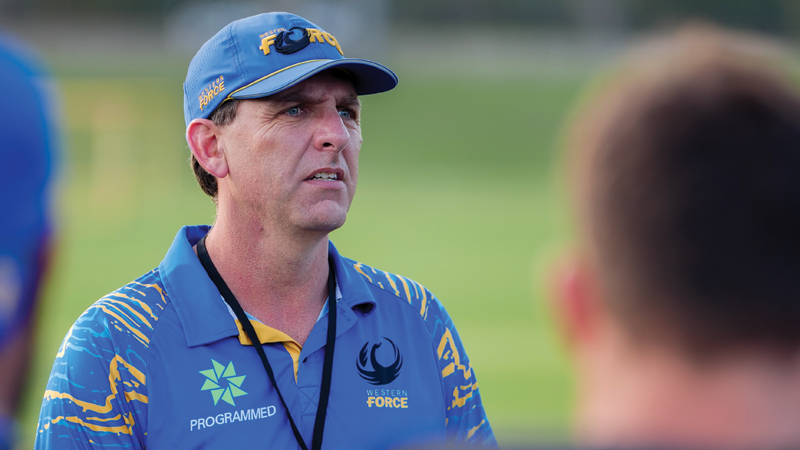 The Western Force squad is back home in Perth, spending quality time with their loved ones after ten weeks on the road. They will self-isolate for two weeks followed by a few further weeks for rest and recovery before returning to training in mid-to-late October. We caught up with Head Coach Tim Sampson to discuss the team’s Super Rugby AU experience.

What were your overall impressions of the Super Rugby AU tournament?

After the first couple of rounds, there were question marks about the standard of the competition. Unfairly, it was being compared with the New Zealand Super Rugby tournament, which was well advanced by then. Overall, from week to week, the competition improved immensely, and I think the last few rounds were of high quality.

Do you think the results were a fair reflection of the Force’s performances?

We cannot hide from the fact that we didn’t get a win but there were so many positive take away’s from each game. We were genuinely in the contest up until the 60th or so minute in most games and just didn’t kick on to give us the opportunity to close games out. We are under no illusions that we must go the distance in games to be successful, the staff and players learnt so much throughout the competition and we will be better for it.

Which areas of the Force game were you most satisfied with?

Aside from technical and tactical aspects, I think the spirit and competitiveness we showed was a highlight for me. Going into the competition we certainly believed in ourselves and how well we could perform. We are blessed with the calibre of players we have in our squad and when they play with as much tenacity and grit as they did, they are a pleasure to coach. Externally, there were a lot of question marks as to how we would go, and I believe we made people stand up and take notice in those first few rounds with how well we played, and the fact that we were in those games for the majority of the match.

How much did your selection changes in the final three games contribute to improvements in the scrums and lineouts?

We did that for different reasons, one of them being midway through the tournament some of the guys were starting to get a bit flat. So, we thought it would be a good time to rotate a few players in. We tweaked our selection through the forwards a bit to give us some fresh legs and create more options around set-piece.

How difficult was it to be on the road for so many weeks?

When we got to the back end of the competition, the travel and moving to different locations took its toll. We were on the road for ten weeks and it was challenging. Trying to find training fields and then lockdown gyms that could accommodate just our squad of 35 or so it was hard and impacted our routine. We were thrown a few curveballs along the way, but they are a tough and resilient squad and I could not be prouder of them. Looking back at some of those close games, I have no doubt that if we had been playing at home our loyal members and supporters would have got us over the line.

What lessons did you learn from the hub approach that might be used in the future?

I would try and win the lotto so I could get all the player and staff’s families to travel with us and all the members and supporters over too! Seriously, I do not think we could have done it too much differently as a lot of it was taken out of our hands. What we did learn is that it is important to remain united through challenging situations. We just got on with it and put our best foot forward which was evident throughout the tournament. We made a point at the start of the competition if we were going to sacrifice so much, then we must make the most of it.

What is your most memorable moment from the Super Rugby AU experience?

I got goosebumps when we ran out at the Sydney Cricket Ground for that first game against the Waratahs. For all the past players/staff members, stakeholders, supporters and for the current squad and staff that moment was a sense of “we are back.” To see us play against the other Super Rugby clubs again was a very special moment for me. I was very pleased with our style of play in our round 3 game against the Reds in Brisbane. Also, the fact that when we played the Brumbies in Canberra, we were only 17-14 down after 60 minutes against a team laced with Wallabies proved that we belong.

What were your parting messages to the team before they left for their break?

To enjoy a bit of time off with their loved ones. In the changeroom after the last game against the Rebels I told them that if I was going to spend ten weeks on the road with a group of people, in a bubble, I wouldn’t want to do it with anyone else. They are a fantastic group of players, with a great captain and leadership group topped off with outstanding staff. Quality humans throughout!

What is next for the Force?

There are still a few decisions to be made about the way forward. Hopefully, before we get back into training, we will know what next year looks like. Once that happens, and we have dates locked in, it makes it easier to work towards.