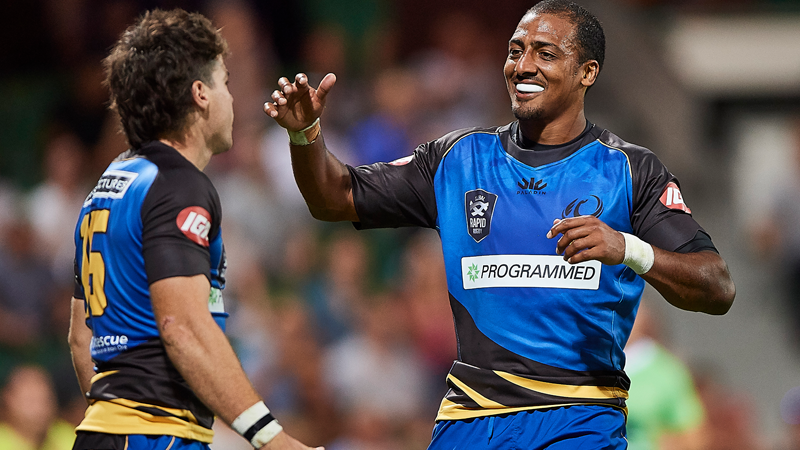 Brache flies with the Force in 2020

Try scoring machine Marcel Brache has committed to his seventh season with the Western Force in 2020.

The fan-favourite is currently in camp with the USA Eagles World Cup squad but didn’t let the distance get in the way of ensuring he is part of Global Rapid Rugby’s inaugural home-and-away season next year.

“I am absolutely thrilled and over-the-moon to have signed again. Obviously, hugely honoured and very excited to have another season with the Western Force,” Brache said from Colorado.

“I’m really looking forward to next season and continuing the vision that Andrew Forrest and Rapid Rugby have in terms of this new competition.”

Brache has played over 50 games with the Force since making Perth his home in 2014 and has been through plenty of highs and lows.

“We were thrown an amazing new opportunity by Andrew and his team and the Western Force is still alive because of that,” Brache said.

“It has been so great to have been part of the transition into what has been some pretty groundbreaking stuff with Rapid Rugby. I am so privileged and grateful to have been a part of this journey and I seriously look forward to what is to come.”

A player with vast international experience having played 17 Test Matches with the Eagles and successful stints in the South African Currie Cup and Super Rugby competitions, he says the Force is a unique club.

“We are a very family orientated squad and club. I don’t just say that. I truly feel it. To have gone through some tumultuous times and to see them all thriving with the Force now and combined with the new talent we have been able to recruit makes me super proud to not only be a part of this team but the family that is the Western Force.”

And growing the rugby pathway in WA is something Brache is extremely passionate about.

“We have had guys thrust into the Western Force squad who were within the Force pathways, in the RugbyWA Senior Academy and Future Force and it has certainly propelled a lot of kids into rugby circles,” he said.

“For example guys like Tevin Ferris and Tom Sheminant, and then obviously Michael McDonald and Carlo Tizzano who are moving east. They are young products developed here and we watch them proudly as they go onto the Super Rugby stage.”

Strong friendships also played an important part in the 31-year-old committing to the Sea of Blue once again.

“To formulate the squad around the experience that we have from players like captain Ian Prior and so many more and then combine that with a lot of the new guys makes me very excited,” Brache said.

“Guys like Ian are some of my closest mates these days. I’m really looking forward to seeing him back on the field 100% match fit again soon and continuing to create something long-lasting that we have been growing here at the Force.”

The trio accepted Super Rugby offers, but also asked to play out this year’s NRC competition in the gold and black of WA.

The decision to ‘finish the job’ with the Force and try and win the NRC competition says much about the character of the individuals, along with with the team first ethos and bond between the entire playing group.

“All three players will be missed and they have shown big improvements whilst here at the Force,” Sampson said.

“Although sad to see them go, we have received a lot of interest from quality players wishing to join our club.”