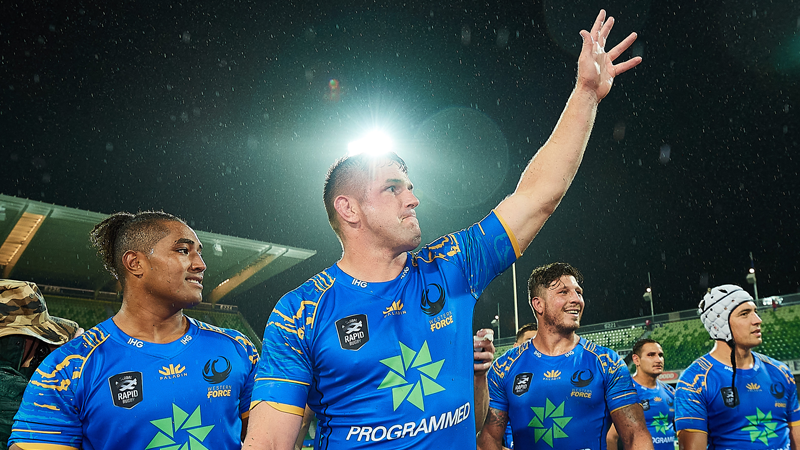 Western Force player #162, Johan Bardoul, has announced the 2020 Super Rugby AU season was his last in professional rugby, as the New Zealander has decided to retire.

Heading west in 2018, Bardoul, affectionately known as Yogi, has thanked the Force for helping him rekindle his love for rugby.

“I didn’t know what to expect when I came to the Western Force,” he said.

“The amount of passion from local guys who have worn the jersey for years gave me such satisfaction to be a part of it. I’ve made lifelong friends here, and I will cherish that forever.

“I remember playing that first game against the Fiji Warriors in 2018 and seeing how much it meant to the team, it helped me find my love for rugby again and the love to play for the Force.”

In his three years with the Force, Bardoul has made 15 appearances competing in the World Series Showcase, Global Rapid Rugby and this year in our Super Rugby campaign.

Bardoul had a profound impact on the group, with one rising star full of praise for his selflessness and influence on his own career.

“He displays what a Force man is, he took me in when I first moved over and helped me settle in,” 20-year-old winger Byron Ralston said.

“He’s humble, he’s got a great work ethic and he cares about his family, not only his own family but the entire Western Force family, the Sea of Blue.

“He’s helped me a lot personally with stuff off the field to make sure it doesn’t affect me on the field. He doesn’t have to do that, but he chooses to help out, which is massive. He will definitely be missed around the club.”

The club would like to thank Yogi for his unparalleled devotion to the cause and his memorable impact on and off the field.

“Johan has been a very important member in our squad over the past three seasons and provided us with that bit of experience when establishing a new squad,” Sampson said.

“He is the type of person who always helps others out and over the years took some of our younger members under his wing.

“Johan found his love for rugby again at the Force and I am very pleased that he was able to end his career enjoying what he loved doing.

“On behalf of many at the club, I would like to wish Johan and his wife Harriett all the very best for what lies ahead.”

Having competed at an elite level in three different countries, the 33-year-old believes now is the right time to start a new chapter in his life.

“I’ve loved my job, I love the game, but I’ve got to the point where it feels natural to make the transition.

“I’ve got my degree in teaching, so I definitely want to start teaching. I’m keen to get into coaching eventually, as I do want to stay in the game, but my focus is on putting my degree to use and potentially starting a new business back home in New Zealand.”

Starting his rugby career at Waikato before moving to the Bay of Plenty Steamers, a province he holds close to his heart, the lock began his Super Rugby journey when current Wallabies coach Dave Rennie called Bardoul to the Chiefs in 2013, before moving to play with Japanese side Yamaha Júbilo.

“Dave Rennie had a massive influence on my career,” Bardoul said.

“He gave me my start with my first full-time contract when I was at an age where most coaches don’t sign players, so I’m really thankful to him.

“Debuting for the Chiefs in my hometown, that was special, and playing in Japan was an amazing opportunity.”

Bardoul wanted to pay special thanks to those who have helped him along the way.

“My biggest supporters throughout my career have been my wife Harriett, my Mum, and my brother Damian. They’ve all been massive for me throughout the years,” he said.