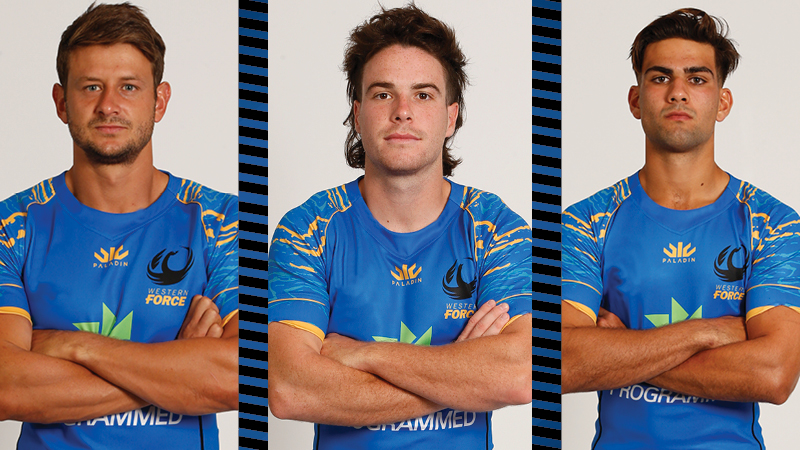 The Western Force is thrilled to announce backs Brad Lacey, Jack McGregor and Byron Ralston have signed on for another two years with the club.

The backline trio all played significant roles this season in our historic return to the Super Rugby competition.

Lacey, a product of the RugbyWA development pathway, was part of the 2011 Australian Schoolboys squad and has also represented Australia at the U20s level before signing his first professional contract with his hometown team and taking part in the National Rugby Championship, World Series Rugby and Global Rapid Rugby for the Force.

Having played juniors and Premier Grade with local side Wests Scarborough, where he went on to win the league title in 2017, the winger’s pace and strength with ball in hand has proven to be a real asset for the club over the past few seasons.

The 26-year-old enjoyed his first taste of Super Rugby this year, making his debut alongside Ralston and McGregor against the NSW Waratahs at the Sydney Cricket Ground, as he went on to earn five caps during the campaign.

“It means a great deal for me to be staying in WA. I grew up wanting to play for the Western Force my whole life,” Lacey said.

“To get the opportunity to stay on board for an extra two years to watch the team grow, as well as the WA pathway for local talent to grow, is an amazing accomplishment in my career.

“We have been given the chance to deliver performances that we and our loyal fans can be proud of. I look forward to that challenge the most.”

Another player with junior international experience, Jack McGregor showed his versatility, pace and vision on the big stage playing at flyhalf and fullback during the 2020 Super Rugby AU season, which included an outstanding try against the Queensland Reds at Suncorp Stadium in Round 3 that earned him a place in the Rugby.com.au Team of the Week.

McGregor, who captained the NSW and Australian Schoolboys’ teams in 2014/15, while also making the Australian U20’s squad in 2017, was ever-present playing every game during the 2020 season.

“I can’t thank Sambo (Tim Sampson, head coach) and Hodgo (Matt Hodgson, head of rugby) enough for giving me the opportunity to stay in Perth and keep playing here in a state and team that I love,” McGregor explained.

“It’s a childhood dream to play Super Rugby, so to tick that off this year with this group was massive.

“The last two and a half years with the club have been unreal and what we’re building here is amazing.”

Byron Ralston, who marked his arrival in Super Rugby AU with a composed opening try on debut against the Waratahs, enjoyed a superb campaign scoring four tries (equal 4th in Super Rugby AU).

The 20-year-old speedster lead the Force in metres gained with over 300 to his name and also earned selection in the Rugby.com.au Team of the Week in Round 3 after scoring a double against the Reds, which included a spectacular 80m intercept try.

Having made significant strides in his development in 2020, Ralston can’t wait to continue his time with the Force.

“The club has shown a lot of faith in me, especially as a 19-year old with only a handful of games in senior rugby. To be amongst that NRC winning team was unreal, and then for them to continue to show faith and sign me on for another two years is really exciting, it feels like home,” Ralston said.

“It was a childhood dream to go out and play Super Rugby. I took a lot of learnings from that experience and realise you’ve got to be on every single moment of every single play, which is the same for off the field with your professionalism and looking after your body.

“I’d really like to thank my club back in Brisbane, Brothers Rugby. They put a lot into my growth coming out of school and making sure I developed up to the standard where I could get a contract in the NRC and my family back home as well.”